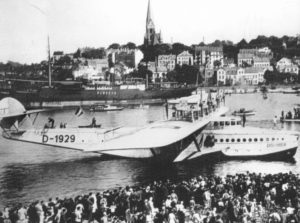 The company “Baltic Seaplane GmbH” has been operating a Cessna 172P on amphibious floats since May 2015 and is thus continuing a tradition that began in Fahrensodde in 1917 – seaplane aviation and the seaplane school.

In 1917 a hydroplane station was founded in Fahrensodde and a hydroplane school for pilots, observers and gunners was set up. The city of Flensburg generously ceded the necessary land to the Imperial Navy. None other than the famous designer Claude Dornier recommended this location to the Imperial Navy because of the ideal conditions on the Flensburg Fjord. Here the training of seaplane pilots could and can be optimally carried out under all wind and weather conditions. The waterflight was trained with aircraft of the type “Gotha WD 7”, a single-engine biplane, of which up to 14 aircraft were stationed in Fahrensodde. The seaplane station was continuously expanded up to the end of the First World War.

At the end of the war, flight operations were discontinued in accordance with the Versailles Treaty and most of the buildings were demolished.

ToAfter the resumption of flight operations in the 1930s, seaplane aviation in Schleswig-Holstein was also intensively expanded. The Flensburg Fjord was used as a training area for flying boats and seaplanes, for example the giant flying boat “Do X”, the “Dornier Wal”, “Heinkel 115”, Junkers JU-52 and other types.

After the end of the war, aviation in Germany came to an end. The Allies imposed a complete flight ban and with it all airfields and water landing areas were closed. With the restart of aviation in 1956, the airfields were gradually reactivated.

It was not until 2004 that “Clipper Aviation” began to re-establish seaplane flight in Flensburg. The Flensburg-Sonwik water landing site was created and permanently approved by the authorities. A long-standing tradition was thus revived after decades of hiatus.

In 2015, the “Baltic Seaplane GmbH” took over the rights to the landing site in front of Sonwik and received the landing rights on the entire Flensburg Fjord and along the Schleswig-Holstein Baltic Sea coast.

Other landing sites of the “Baltic Seaplane GmbH” such as in Plau am See in Mecklenburg-Western Pomerania also have a deep connection with the history of seaplanes. Seaplanes were tested in Plau am See as early as 1910.

On weekends, primarily tourist-oriented flights – sightseeing flights – are offered and carried out in order to show our passengers the beautiful landscapes of the Flensburg Fjord and the lakes in Mecklenburg-Western Pomerania.

The “Baltic Seaplane GmbH” is one of the very few flight schools in Europe where you can learn seaplane flying and acquire and maintain the license. Our flight instructors, all with many years of experience in seaplane flying, look forward to teaching you this unique type of flying!